PDQ Airspares have unveiled a new website and identity

The decision to launch a new website to showcase their expertise was an easy one for co-founder Nic Lewis: “We’ve been so busy over the past twenty-seven years establishing PDQ as the go-to provider in the industry that we’d neglected ourselves a little, so a new identity and website was long overdue.”

Known for their originality in the industry thanks to their stand-out displays at trade shows around the globe, the new PDQ website is equally as striking. Introducing a new colour palette to complement their existing red logo, as well as new typography, the new website takes PDQ in a new direction.

“Our industry is a very serious one but we wanted to bring some light-heartedness to it by doing something a bit different. The new colours, fonts and debut of new management team caricatures, make for a very quirky site, which we hope will be viewed favorably.”

From their head office in Fordingbridge, Hampshire and with other locations around the world including Singapore, Dubai and China, PDQ Airspares are confident of striding further ahead within the global aviation industry over the coming years. 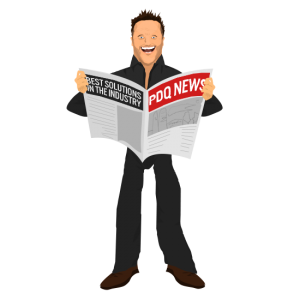